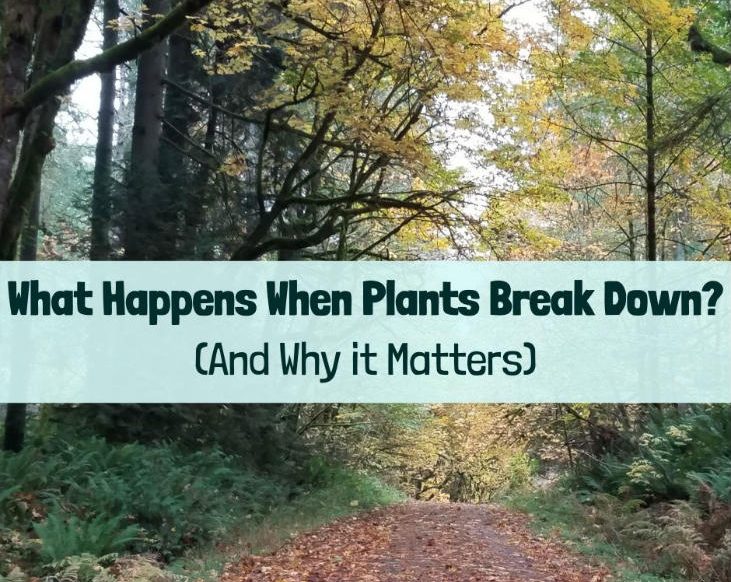 What Happens When Plants Break Down? (And Why it Matters)

Everyone loves the tender, vibrant greens of new growth, but what about when plants break down? Regeneration is a two-sided coin. Decomposition, the uncharismatic antithesis of new life, may not be much to look at. But it’s a vital part of your wild homestead, and it’s fundamental to nature’s capacity for regeneration. Plant decomposition feeds soil life, which not only breaks down spent plants into forms that can nurture new growth, but also adds other benefits to your wild homestead.

Posts may contain affiliate links, which allow me to earn a commission at no extra cost to you. Your purchase through the links helps me create content like this post (full disclosure).

Think of the last time you walked through a forest. What did you see on the forest floor?

Presumably you weren’t wading waist-deep through leaves and debris from decades past, and no one was going around raking it up, either.

In a healthy eco-system, there’s no need to cart up and haul off the debris—in fact, dead wood and plant matter form a vital part of that system.

We know this about natural areas, but what about our own yards or homesteads?

When left in place, decomposers step up to break plants down and return them to the soil, so that new life can emerge.

Want to make the most of plant breakdown on your wild homestead this fall? Before you scroll down, be sure to get your free cheat sheet taken from the blog post, "Chop-and-Drop: A Quick and Easy Way to Abundance."

Fungi, detritavores, and microscopic bacteria all play a role to help plants break down.

You’re not the only one that gets to enjoy the bounty from your garden. As the abundant harvest season wraps up and your plants breathe their last, a triumvirate of opportunists step in to make a living off the dead.

So who are these opportunists and what do they want with your garden?

The life that does the humble work of breaking down dead plants comes in three camps:

Each type of decomposer performs a unique function in the breakdown process. Their actions work in concert to take something as as sturdy as an oak and break it down into simpler and simpler parts until it becomes rich, soft plant food.

When plants die, fungi are often the first to arrive at the scene. They play a vital role in plant decay, and they help living plants as well.

Fungi are often thought of as the primary decomposers. That’s because they’re pretty much the only ones out there that can break down a tough compound in woody plants called lignin.

Also, while bacteria, termites, and other decomposers have to work away at the surface of dead plants, the hyphae of fungi can stretch deep into the dead plant matter and break it down from inside.

The hyphae are sort of like the “body” of the fungi, as opposed to the mushrooms that we eat, which are just for reproduction.

Look at some leaf litter on the ground, or some rotten wood, and you may find tiny white strands running across like fine threads.

Those are hyphae threading through the dead plants, dissolving the cell walls and absorbing the nutrients released.

Fungi make it easier for other decomposers to access and consume the dead plant matter, further speeding up the process of decay.

Above and beyond their role as decomposers, fungi also help plants access nutrients and water by transporting resources to your plants in exchange for sugars.

Unlike fungi, detritavores like this snail have to eat away at the surface of plants.

Detritovores are the tiny critters that chow through dead organic matter.

In other words, they’re the ones that actually eat the stuff, and digest it internally, as opposed to absorbing it externally like fungi and bacteria. In doing so, they break it down into smaller and smaller pieces, which let other life forms step in.

These are your millipedes, pill bugs, and some types of beetles, as well as slugs, springtails, and the beloved earthworm.

They eat tunnels through wood or leaf litter, breaking plant matter into smaller pieces and increasing the exposed surface area, which lets other life move in.

They also digest plant matter into forms that are easier for other life to break down. (Of course, they get some help with that from the bacteria that live in their gut.)

Different types of detritovores eat plants at different stages of breakdown. A termite can chomp through solid wood, much to many homeowners’ chagrin. But by the time an earthworm gets ahold of the dead plant matter, it’s already pretty-well broken down.

Earthworms also aerate the soil, improving soil structure and promoting healthy breakdown by oxygen-loving aerobic bacteria. Like fungi, everything detritivores do accelerates the breakdown process, letting other decomposers get in and join the feast.

Your soil is alive! Even a teaspoon of rich garden soil can have up to 1 billion bacteria! These microscopic garden helpers can convert dead plant matter back into plant food.

If fungi can walk through walls, bacteria are the potions masters in the wizardry of regeneration, transforming the decaying plant matter into the nutrients and minerals plants need to grow.

When bacteria get to work on dead plant matter, they leave behind gardeners’ gold—carbon, nitrogen, and other nutrients and minerals that plants need to thrive, like phosphorus and magnesium.

And by “get to work,” I mean leading happy, fulfilling lives in their own microbial ways.

As long as there’s plenty of air in the mix, it doesn’t smell bad.

In a low-oxygen environment, the process gets hijacked by anaerobic bacteria that don’t need oxygen. It takes a lot longer, smells foul, and generates methane.

That’s what happens in a bog. (Or in a landfill.)

But in nature, the vast majority of plant breakdown is aerated.

All told, the final product is carbon-rich, nutrient-rich organic content that is literally compost.

What Happens to Nutrients When Plants Break Down?

When plants die, the nutrients locked up within them are released back into the environment, laying the grounds for new growth and abundance.

The breakdown of plants is essential to nature’s capacity for regeneration.

Like night and day, the complimentary opposites of growth and decay need each other.

Plants take in water from the earth, carbon from the sun, and light from the sun to make the sugars that power their growth. They also take in nitrogen, phosphate, and other nutrients from the soils around them.

When plants break down, the nutrients and minerals that were locked in those plants are released back into the environment—into the earth, water, or air—and converted back into forms plants can use.

Some of that plant matter ends up supporting animal life as well, since many detritivores eventually find themselves in the belly of a larger critter.

Those nutrients help power the larger life form and are eventually returned to the earth as animal droppings or when the larger animal meets its maker.

When plants break down in the soil they grew up in, those components are returned to the soils of their birth, laying the grounds for a new generation of plant life.

Earthworms and other critters mine the decomposing matter into the earth and help aerate the soil, further promoting healthy breakdown. The result of this process is what we call topsoil.

Ultimately, the ongoing cycle of breakdown acts as a slow-release fertilizer, constantly supplying plants with the nutrients they need.

Renewal. That is the beautiful end-result of decay.

When plants break down in place, they become part of a balanced eco-system, setting the stage for new life to emerge.

But when dead plant matter is taken from its home turf and carted away, the nutrients and minerals are lost to the soils that produced them.

Over time, those soils are less and less able to support new plant life.

Letting dead plant matter break down in place, as it would in nature, promotes the fertility of your soils.

Harnessing the Benefits of Plant Breakdown on your Wild Homestead

Our garden beds are covered in leaf mold, and the leaves will continue to break down throughout the fall and into spring. Leaf mold is a great way to use the breakdown process to improve your soil.

When plants break down on your wild homestead, you can harness the cycle of renewal and use it to support your future growing efforts.

The breakdown process is sensitive to temperature and moisture. It ramps up with heat and moisture, and slows down if it’s cold and dry.

We know this intuitively when we look at our kitchen. How long do you think it would take grapes to go bad on your counter versus in your refrigerator? What about a box of raisins?

What this means from your wild homestead is that the bulk of the plant breakdown happens when there’s a lot of moisture, and before it gets too cold.

In other words, for temperate regions, autumn is prime time to harness the benefits of plant breakdown.

Decomposers are good friends to have around. Here are several ways that you can work together on your wild homestead:

Prepare land for planting: Want to plant a new garden in spring? Autumn is the time to start. If you sheet-mulch a grassy area in the fall, by spring most of the grass will have broken down into a nutrient-rich soil ready to nurture your plants.

Keep fall leaves—or get more! There are a number of great ways to use fall leaves on your wild homestead, including making a great mulch and soil amendment called leaf mold or simply leaving them in place.

Lots of people are wanting to get rid of their fall leaves, making this a very cheap and easy-to-access source of mulch. One way to find more fall leaves for your wild homestead is by using Craigslist or Nextdoor.com.

The decomposers will find them and get to work, returning them to soil.

As the dead wood buried in your hugelkultur bed breaks down, it acts as a slow release fertilizer plants and supports the fungal networks that will nurture your young plants.

It also soaks up water like a sponge, letting you cut back on watering, or even eliminate watering altogether!

What's your favorite way to use plant breakdown on your wild homestead? Leave a comment to share!

Thanks to our wonderful patrons for supporting this site!

As a thank-you for supporting our mission, patrons gain exclusive benefits based on their support level. Benefits include: “quick-win” wild tips, video-based wild tips, and instant access to our complete library of nearly 50 cheat sheets, checklists, and other content upgrades.

How to Salvage Native Plants for Your Wild Homestead

Michaela is a content creator, editor, and blogger for Wild Homesteading. She studied climate-resilient development as a Fulbright Scholar to the UK, and she has worked on various food and health policy initiatives with our state legislature. She wants to help people experience wonder and healing through time in the natural world. She loves helping her two young children fall in love with nature.

I Want Help To:

Please log in again. The login page will open in a new tab. After logging in you can close it and return to this page.